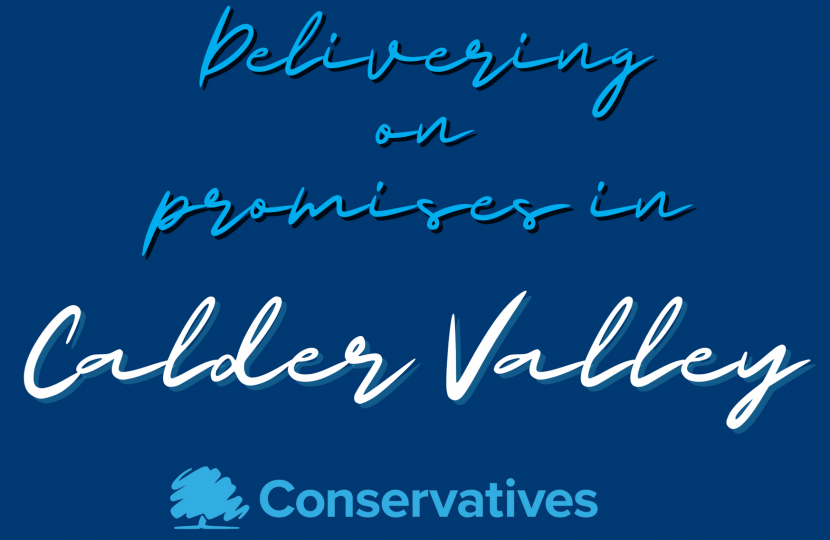 Craig Whittaker MP has welcomed the progress made by the Conservative Government since December 2019 in passing 44 new laws that have benefited people across Calder Valley.

Laws to protect our NHS, drive jobs and investment, and regain control over our trade and borders have been delivered by the Conservative Government, in a period which saw the UK face a global pandemic and become an independent nation outside the EU.

While taking action to save lives and livelihoods, the Government has continued to deliver on its manifesto commitments and passed laws to unite and level up the whole of the country.

This includes putting the record £33.9 billion funding commitment for NHS frontline services into law through the NHS Funding Act, guaranteeing the biggest cash boost in history for the years ahead – while the Medicines and Medical Devices Act has secured faster and safer access to innovative medicines for patients.

Following the UK’s departure from the EU and the end of the transition period, the Conservative Government has also delivered a number of laws so that the UK can take advantage of the opportunities ahead as an independent sovereign nation.

The Trade Act passed in this session has established the legal framework to help the UK strike new trade deals around the world, the Agriculture Act has freed British farmers from the unfair and bureaucratic Common Agricultural Policy, the historic Immigration and Social Security Co-ordination (EU Withdrawal) Act has allowed the UK to take back control of its borders, and the Fisheries Act allows the UK to decide who fishes in our waters and under what terms.

Tougher sentences for terrorists were introduced through the Terrorist Offenders (Restriction of Early Release) Act, and the landmark Domestic Abuse Act will help tackle the devastating impact of domestic abuse – helping to protect the public, cut crime and make sure that the UK builds back safer from the pandemic.

In the face of an unprecedented global pandemic, the Conservative Government has also delivered laws to ensure that the right measures were in place to protect the health and safety of the nation and support lives and livelihoods.

This included protecting jobs through billions of financial support, providing affordable loans, business rates relief and increasing flexibilities in planning to help businesses provide for social distancing, as well as making sure that the NHS was able to provide care for all those in need.

A total 44 Government Bills were passed during the session, and over 1,400 pieces of secondary legislation were also approved by Parliament, as well as a number of Private Members’ Bills.

The State Opening of Parliament will take place on Tuesday 11 May, where Her Majesty’s Most Gracious Speech will set out the Government’s agenda for the next parliamentary session and new plans to build back better.

“At the 2019 general election, I was elected by the people of Calder Valley to deliver on the people’s priorities – and that is exactly what this Conservative Government has done.

“Since the election, we have delivered 44 new laws that will help to unite and level up the country - including enshrining our record NHS funding boost into law, toughening up sentences for the most serious offenders, and laws that will allow us to take advantage of the new opportunities we have as an independent free trading sovereign nation.

“Ahead of the local elections on 6 May, the choice for the British people is clear. Conservatives, who are delivering on the priorities of the British people – or Labour, who are playing political games because they have nothing to offer the country.”

“This Parliament has been witnessing to an extraordinary chapter in the UK’s history, spanning the new freedoms we’ve gained as a sovereign nation outside the EU to the impacts of a global pandemic.

“The changes we’ve delivered have allowed us to take rapid action to protect our country from coronavirus and will make our country stronger, fairer, safer and greener.

“But there is much more to do - and I will remain laser-focused on delivering the people’s priorities as we work to unite, level up and increase opportunity all across the UK.”.

Keeping your mental health in check

For any further help or guidance, check out page 11 & 12 for useful contacts.