Ensuring that our schools get the support which they need 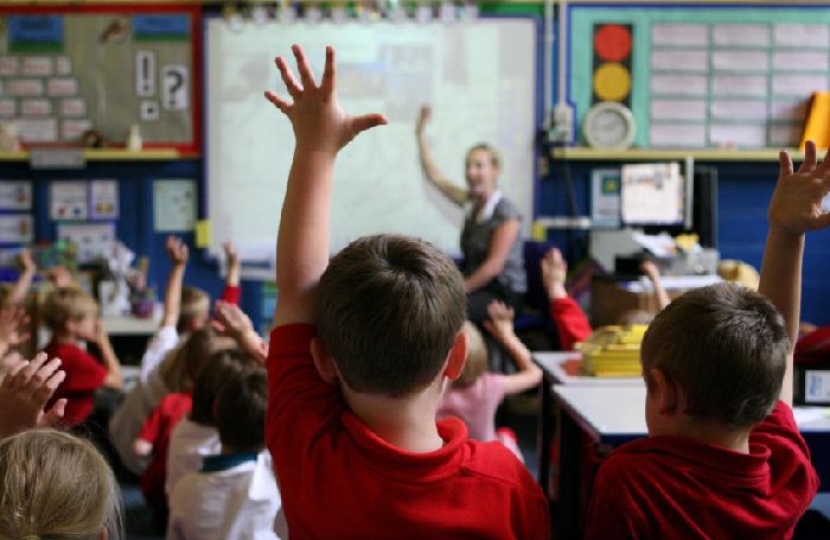 Ensuring that our young people get the very best start in life has always been something that I am very passionate about. The number of children in the Calder valley attending good or outstanding schools has risen sharply since 2010, whilst the funding going into our schools is at a record high. Whilst there are cost pressures in some schools, the figures which are used by the 'school funding cuts campaign', and many of the claims which they make, are inaccurate and misrepresent what is happening in our schools on a daily basis. A copy of a recent letter which I sent to Councillors is below which adds some context to some of the claims made by the campaign.

Thank you for writing to me in relation to school funding in Calderdale following the discussion at your local Full Council Meeting. Ensuring that our young people get the very best start in life is something that I am very passionate about. As you know, I served as the Cabinet Member for Children and Young People prior to becoming an MP and have subsequently served on the Education Select Committee in Parliament. I know that many members of the Council will share my passion for delivering an excellent education for all our young people and I hope that they find this response informative.

Before commenting on the important issues connected with school funding, it is imperative that we put this debate into context. At present, school standards are rising. As of August 2018, there are 1.9 million more children being taught in good and outstanding schools when compared to 2010. This represents 84% of children, compared to just 66% in 2010. This increase in the number of children attending good or outstanding schools, which I’m sure you will welcome, is in part attributed to the reforms that the Government has introduced. It is a fantastic achievement that in my own constituency, 87% of pupils were attending good or outstanding schools in August 2018 (the last time for which figures are obtainable) compared with 79% in March 2014.

According to independent experts, the Government’s reforms have led to a dramatic improvement in children’s literacy skills. England has risen to 8th place in the 2016 Progress in International Reading Literacy Study, up from the historic low of 19th place under the previous Government.

These figures put the school funding debate squarely into context. The funding which we give to schools is of course important but the quality of education that is provided to our children is determined by numerous factors. Those who concentrate solely on school funding and whom willfully ignore the improvements in attainment and standards within schools fail to provide a balanced perspective of the performance of our educational system. As you know, the last Labour Government recognised that improving standards was about more than just money – it was for this reason that both Tony Blair and Gordon Brown were committed to reforming the school system and the introduction of academies (a belief that was particularly evident following the early years of the Labour Government which saw little improvement in standards and attainment despite increases in funding [between 2000 and 2009, England fell from 7th place to 25th place in reading, from 8th to 25th in Maths and from 4th to 16th in Science in international league tables for school performance]).

In addition to more children attending good and outstanding schools, England achieved its highest ever reading scores in 2016, moving from joint 10th to joint 8th in the international rankings. This follows a greater focus on reading in the primary curriculum and a particular focus on phonics. Thanks to the hard work of teachers across the country, 163,000 additional six-year-olds are on track to be fluent readers, compared to 2012 when the Government introduced the light touch phonics screening check. This will go a long way to helping every child reach their full potential. This means that more children in Calderdale are getting the skills they need to excel later in life.

In relation to the specific issue of school funding, you will be aware that the National Funding Formula is the biggest improvement to the school funding system for decades and ends the historic postcode lottery that saw huge differences in funding between similar schools in different parts of the country. Under the previous funding arrangements introduced by the last Labour Government, Calderdale was penalised due to a comparative lack of deprivation in the borough – this meant that we received lower funding per pupil when compared with most northern boroughs. The fair funding formula goes someway to addressing this anomaly with Calderdale receiving an additional 0.7% in block funding which amounts to just under £1 million additional funding per annum.

Across the country more money is going into schools than ever before and school funding is at a record high. The core schools budget has increased to £42.4 billion this academic year and is set to rise to £43.5 billion in 2019-20. This follows the additional £1.3 billion of funding over and above what was promised in the last Spending Review. In fact, figures from the independent Institute for Fiscal Studies show that real terms per-pupil funding in 2020 will be more than 50% higher than it was in 2000.

The calculations of the ‘Schools Cuts’ campaign, which is the basis for the motion that the Labour Group presented to the Council, misrepresent the funding schools will receive, presenting historical pressures on school budgets as if they were still to occur. The Department for Education has continued to challenge the misleading claims made on their website and in the media. As a result, the campaign has backtracked on some of their claims and made changes to their website. Indeed, the UK Statistics Authority has been quite categorical in stating that the claim made by the Schools Cuts Campaign that 91% of schools are facing funding cuts gives a ‘misleading impression’. These erroneous statistics and calculations were also used by the local Labour Party during the General Election Campaign in 2017.

On this very point I would also draw your attention to a letter sent to Head Teachers and Elected Members in February 2017 by the then Director of Adults and Children’s Services, Stuart Smith. This letter unequivocally stated that ‘there are a number of messages going around suggesting that school budgets are being cut. The purpose of this letter is to reassure you that it is not the case’.

It is also worth noting that the £2.5 billion Pupil Premium scheme delivered by the Government has provided additional support to pupils from poorer backgrounds and has succeeded in its aim of closing the attainment gap between disadvantaged secondary school pupils and their more advantaged peers

Of course, I acknowledge that, despite the protection of the overall schools’ budget, there have been cost pressures that have affected schools in Calder Valley in recent years. As a result, the Department for Education has launched a Supporting School Resource Management guide which provides schools with practical advice on savings that can be made on non-staffing spending. One of the tools available is the financial benchmarking service which helps schools compare their spending on a wide range of costs with that of similar schools and to share good practice. School leaders and governors can use it to identify where they can make savings, directing the maximum resource into good quality teaching.

It is obviously important that schools scrutinise their own budgets and ensure that every penny which they have is well spent. I am aware that at least one Primary School Headteacher in Calderdale earns more than £125,000 per year. Our local teachers and school leaders do a fantastic job and deserve to be well remunerated, but I think that many local parents would be surprised by the level of pay which some senior school staff receive. It is obviously down to those particular schools to justify such salaries against other competing demands in the current climate.

You may be aware that the level of maintained school balances retained by local authority schools is more than £6.9 million. If the financial reserves held by academies within the borough were to be included, I understand that this figure would rise to £15 million. Whilst some schools may understandably retain money for a specific purpose, the level of reserves is particularly high with some schools retaining over half a million pounds in their accounts. All schools have a duty to ensure that they are operating efficiently, that money is being focused on their ‘core purpose’ and that any funding which is available to them is being used in the most effective way.

It is also important to consider the international context when discussing education expenditure. There has been considerable discussion of international comparisons of education spend. Multiple measures in the OECD’s ‘Education at a Glance’ show the UK as a relatively high spender on education. The widest measure is total expenditure of educational institutions, which includes state-funded and independent schools, further education and higher education, from all sources including government, private and international. On this comparison, the UK is one of the very highest spenders. It is also possible to look at measures which isolate government funding of primary and secondary schools. On these, I welcome that the UK had the highest total government expenditure as a percentage of GDP in the G7 and was one of the higher G7 countries on expenditure per student.

Finally, I hope that you will welcome the announcement in the Autumn Budget which specified an additional £400 million for schools in England to spend on improving their facilities. This funding will be allocated directly to schools this financial year. The average primary school is set to receive around £10,000 with around £50,000 going to the average secondary school. This builds on the commitment to invest £23 billion towards improving and refurbishing school buildings between 2016 and 2021.

Calderdale has received over £50 million from Government over the last few years for spending on our school buildings. I know that you will welcome the money that we have received from the Government which has allowed for investment of nearly £5 million in both Todmorden High School and Calder High School, to name just two of the schools that have received investment thanks to this funding. As you know I have campaigned for many years for improvements and for better facilities at both high schools and I am delighted that Government passported funds will allow secondary students in the Upper Valley to access the facilities which they deserve.

May I thank you once again for taking the time to write to me. I sincerely hope that this letter demonstrates both my own personal commitment, and that of the Government, to ensuring that every child in Calderdale receives an excellent education and that our local schools are well placed to deliver this.

A Conservative MP says he is "furious" it has taken nine days for the government to trigger funding for flood-hit communities like his.

Thousands of pounds of support is being made available for homes and businesses affected by Storms Dennis and Ciara.