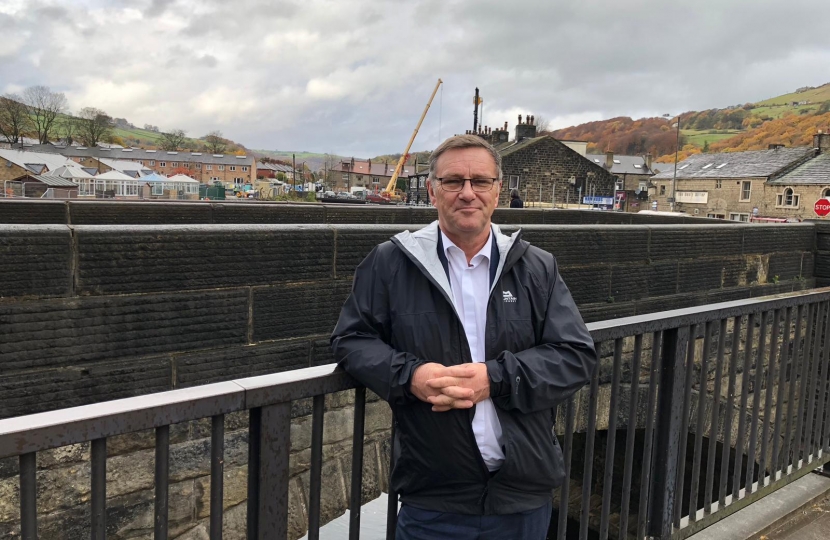 Environment Secretary Theresa Villiers has announced a new round of flood defence investment today for communities across England. The announcement includes an additional £19 million for different flood projects in Calder Valley including the planned flood defences in Hebden Bridge (£11 million), Brighouse (£5 million) and Mytholmroyd (£3 million). This will ensure that the different flood prevention projects being delivered across the Calder Valley are all fully funded and can be delivered without delay. This additional £19 million from central government is over and above the unprecedented £100 million already given by the government for flood support and prevention work here in the Calder Valley.

Thirteen projects across England will benefit from a share of over £62 million, which as well as helping develop existing flood defences, will boost economic regeneration and increase prosperity in those areas. Many of the projects are located in communities which suffered from flooding during winter 2015.

In total, more than 9,004 homes will be better protected against flooding through this round of funding – many of those here in the Calder Valley. The extra funding is in addition the government’s commitment to invest a record £2.6 billion over six years up to 2021 to better protect 300,000 homes across the country.

‘We have already received over £100 million from central government for flood support and prevention work here in Calder Valley. This is one of the largest financial packages ever provided for flood support to a single constituency. This funded assisted residents and businesses in the aftermath of the 2015 flood and is funding the different flood preventions schemes across all of our different communities. Because some of the initial costs of the different schemes increased, a shortfall emerged in relation to the costings for the different work. I have lobbied our new Prime Minister and Environment Secretary for several months to request that this funding gap be addressed and I am delighted that the government have now awarded us an extra £19 million to bridge this gap. This additional funding will ensure that the schemes in Mytholmroyd, Hebden Bridge and Brighouse can all proceed as planned and are fully costed.

“I am delighted to announce over £60m of additional funding to better protect communities which are vulnerable to flooding, particularly across parts of northern England.

“Events this summer have shown that investing in flood risk management is more important than ever, and this funding builds on our long-standing £2.6 billion commitment to better protect 300,000 homes from flooding and coastal erosion over six years.”

Funding will support the development of 11 projects in the Northern Powerhouse, including seven in Yorkshire, four in Cumbria and Lancashire and two in the North East.

£19m is set to go to Calder Valley, where the Mytholmroyd, Hebden Bridge and Brighouse schemes will be developed. More than 3,000 properties flooded in the West Yorkshire valley during the 2015 floods, leaving communities in the area badly affected. With this new boost, the two projects at Hedbden Bridge and Brighouse are now to be developed, with work due to begin next year. Communities in Yorkshire will also receive additional funding with more money for the Tadcaster Flood Alleviation Scheme and additional funding for defences at Sowerby Bridge.