This Month in Politics (August) 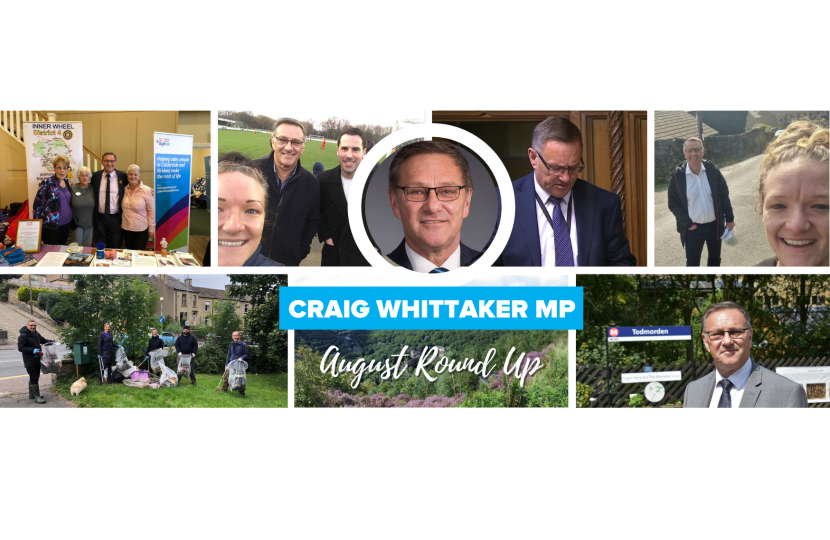 Well, another jam-packed month is over. Despite the House being in recess, there has been plenty of work to do. From meeting with local businesses and residents up and down the Calder Valley, to the by-election in Ryburn, to the dreadful situation in Afghanistan.

As we start our return to normality we have a lot of work to do, to create the Global Britain we promised in our 2019 Election manifesto.

As you will all be aware, the withdrawal from Afghanistan has dominated the national political landscape this month. In 2014, the UK ceased all combat operations in Afghanistan and brought the majority of troops home, re-orientating the UK’s role and involvement in the country. About 750 personnel remained in Afghanistan under NATO’s mission to train and assist the country’s security forces. Last year, however, the US decided to withdraw its troops. Furthermore, following President Biden’s announcement in April that all US forces would leave by September at the very latest, our NATO allies decided they were unable to continue this US-led mission without US involvement.

Despite the awful way this has ended, we must the many positives we have achieved from our time in Afghanistan. For the last 20 years we have kept Al Qaeda off our streets, dispersed the organisation and drastically reduced the terrorist threat to the UK. Those were 20 years of keeping our streets safer but also building infrastructure for one of the poorest countries in the world and educating women and girls, with over 3.6 million girls in school this year alone who would have never had access to education. For this, we must always remember the 457 brave British service personnel who laid down their lives in Afghanistan, ensuring our safety and preserving the UK's national security, alongside the 69,000 Afghan army troops who have also given their lives in this conflict.

Many scenes of the Taliban in Afghanistan are distressing, and I know that the international communities of the UN and NATO have agreed it would be a mistake for any country to recognise a new regime in Kabul prematurely and bilaterally. As the Prime Minister has said, we will judge this regime based on the choices it makes - and by its actions rather than its words.

This month has also seen a by-election here in the Calder Valley. A seat in the Ryburn ward was left vacant by the resignation of the sitting Independent Councillor. Following a good campaign by the Conservative team, we were able to take this seat on Calderdale Council. I would like to say a huge congratulations to Felicity on her victory, and to everyone who worked hard and helped out in the election, from delivering leaflets, to knocking on doors, and everything in between. It is a great result for the whole Calder Valley team.

Finally, it has been great to get back out and meet people again following the pandemic.  I have taken part in many visits across the Calder Valley, and have been privileged to meet so many people. From visits to open Todmorden Wheel Park, to Mytholmroyd Train Station, to Timeout Children’s Home, Elland Cricket club for the Crick-EAT campaign, to the Flooding Roundtable with Flooding’s Minister Rebecca Pow in Hebden Bridge, and so many more. I have really enjoyed getting out and talking to people again and it has been a pleasure to meet you all.

Overall, it has been a month of many positives, and, with Parliament set to return on Monday the 6th September, I will be back in a full Chamber in the House of Commons, as we will continue our work to deliver on our pledges to you in the 2019 Election.