More than 19,000 jobs created by Kickstart Scheme so far 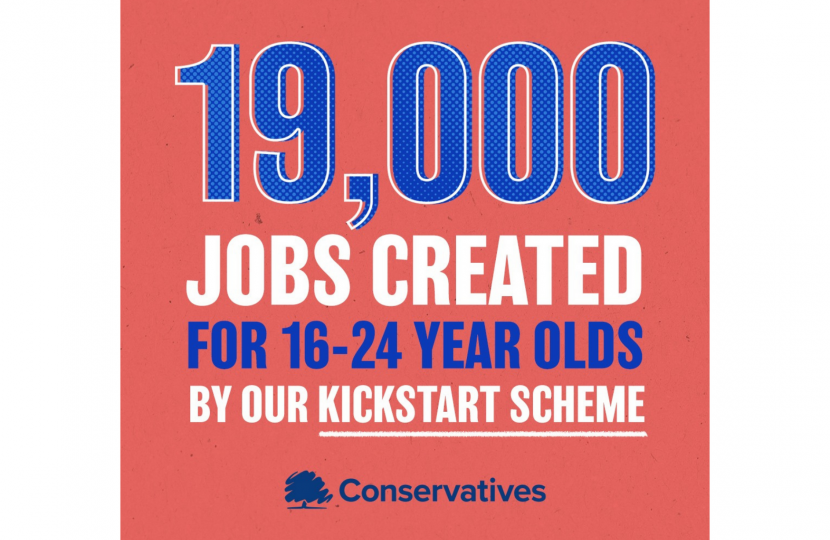 Over 19,000 job placements for unemployed young people have so far been created under the government’s £2 billion Kickstart Scheme - with tens of thousands more expected in the months ahead.

Our country’s future will be built by the next generation, so it’s vital that we harness the talent of young people as we rebuild from the pandemic. But this isn’t just about kickstarting our economy, we’re giving opportunity and hope to thousands of young people, kickstarting their careers and offering them a brighter future.

I know many businesses who have signed up to the Kickstart Scheme here in the Calder Valley. The scheme will provide life changing opportunities for young people across our local area.

It is true that young people have been hard hit by the pandemic. Businesses have cut recruitment, and this has decreased starter position availability. The Kickstart Scheme will ensure businesses continue to employ and train our young people. This will add value to business, whilst also improving career opportunities.

Every job created by the Kickstart Scheme is a potentially life-changing opportunity for a young person, and the heartening response of employers shows they recognise the huge value in giving youth a chance.

The pandemic has hit young people hard, but we are doing everything in our power to give them hope and the chance to find their place in the world of work.

Employers from all corners of the country have signed up, creating thousands of new and interesting jobs and helping us to level up as we build back better.

Young people have been some of the hardest hit by the pandemic and unemployment can have longstanding implications for their future jobs and wages. The Kickstart Scheme runs until December 2021 and is expected to create more than 250,000 high-quality jobs for them.

On a visit with the Prime Minister to a Tesco warehouse yesterday (11 November), the Chancellor met some young people who are set to start their Kickstart placements next week. Other businesses including Bloomberg, British Chambers of Commerce, Network Rail, Barnardo’s, YMCA, LADbible Group, Tech Nation, The Royal Mint, KFC, and Farrow & Ball have also committed to support the scheme. Over 500 gateways - organisations that act on behalf of employers offering 29 or less vacancies - have registered to help the smallest businesses to hire young people too.

Each job placement lasts six months and is fully funded by the government, helping young people build their confidence and experience in the workplace, while earning a regular wage. Young people on Kickstart will also get additional employment support and training to help them progress during their placement, with £1,500 available to employers to cover this training as well as other onboarding costs.

The scheme is just one part of a package of support for young people. The government has invested £1.6 billion in increasing the number of apprenticeships, traineeships and employment support schemes, helping people to build the skills they need to get back into work.

The government have today announced that from next Wednesday (2 December) Calderdale will move into Tier 3 restrictions. This is for areas with a very high or very rapidly rising level of infections, where tighter restrictions are in place.