Plans to boost cycling and walking access on canal towpath 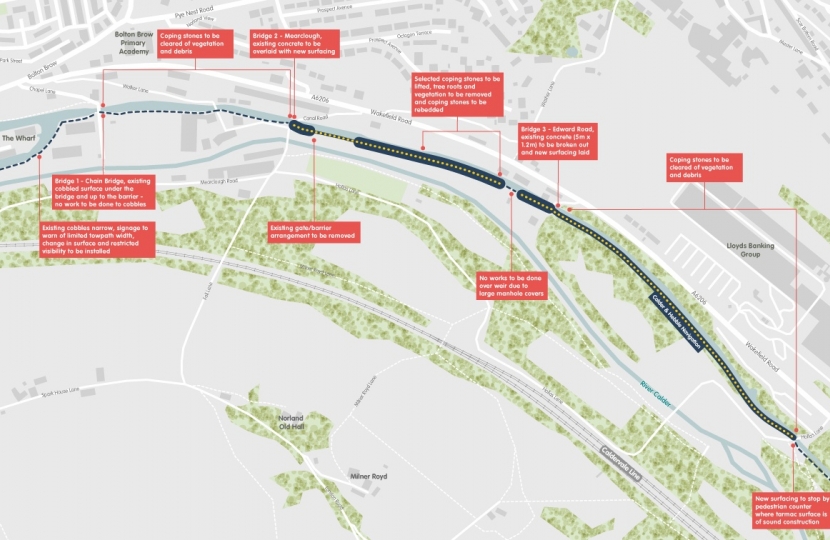 Wheels are in motion for a £2.1m scheme to improve cycling and walking access on a 6km section of the Rochdale Canal towpath between Hebden Bridge and Todmorden.

This is part of the West Yorkshire Combined Authority’s £60m CityConnect programme aimed at encouraging more people to travel by bike or on foot.

At a meeting of the Combined Authority’s Investment Committee on Wednesday 6 February, approval was given to progress plans for the scheme, which will form part of the Calder Valley cycle route.

The plans include resurfacing and widening the canal towpath, building on improvements to a 10km section between Hebden Bridge and Sowerby Bridge, and providing communities along the Calder Valley with a traffic-free, flat and attractive alternative route to the A646.

The scheme, which will use Department for Transport funding, secured by the Combined Authority and Calderdale Council, with additional contributions from both organisations, will be delivered in partnership with Canal & River Trust.

The route will add to those already constructed and under construction in the area which will ultimately provide a continuous off road cycle way across Calderdale, from Brighouse to Todmorden.

The works between Hebden Bridge and Todmorden are due to start in the spring with the scheme completed by autumn.

The project is part of a wider package of canal towpath improvements being delivered across the region through the CityConnect programme, including between Huddersfield and Milnsbridge on the Huddersfield Narrow Canal and between Silsden and Riddlesden on the Leeds Liverpool Canal as part of the Airedale Greenway.

Improvements to a 2km section of the Calder and Hebble Navigation Towpath between Sowerby Bridge Basin and Hollas Lane Bridge, linking to the existing Calder Valley Greenway, provide a traffic free cycling and walking route towards Halifax, Elland and Brighouse.

For more information about this and other CityConnect projects visit www.cyclecityconnect.co.uk/projects