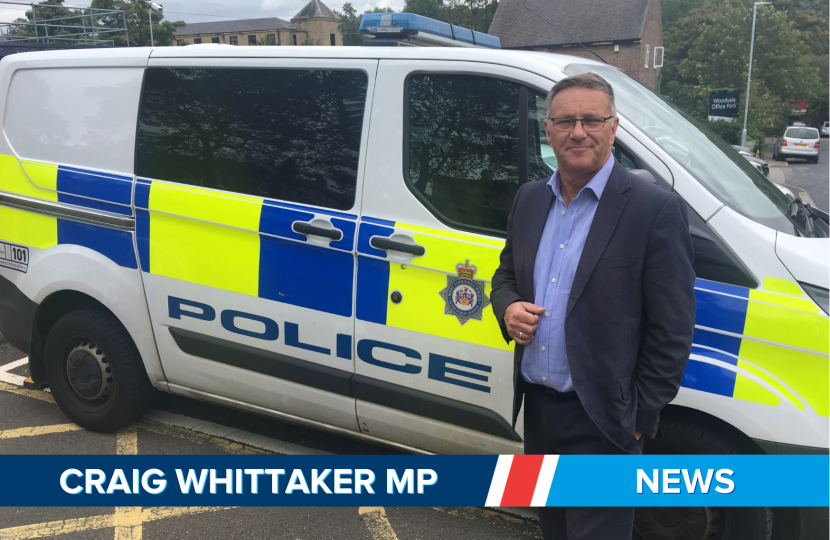 Craig Whittaker MP has welcomed the additional £1.4 Million awarded to organisations in West Yorkshire through the fourth round of the Conservative Government’s Safer Streets Fund.

Craig Whittaker MP has welcomed the additional £1.4 Million awarded to organisations in West Yorkshire through the fourth round of the Conservative Government’s Safer Streets Fund. which will help to make streets safer through projects to crack down on neighbourhood crimes and prevent violence against women and girls.

This additional funding, part of the £50 million from the latest round of the Safer Streets Fund, will go towards measures proven to cut crime, including extra CCTV and streetlighting in communities alongside engagement work to change attitudes and behaviours to prevent crimes being committed.

Craig Whittaker MP has welcomed the launch of the fourth round of the Safer Streets Fund which has now opened, providing another opportunity for police forces, local councils, the British Transport Police, and eligible community groups across England and Wales to bid from a fund of £50 million.

This round of funding will invest in essential measures, including improved street lighting, and it will encourage police and community groups to deliver focused plans to help make women and girls feel safer on our streets, as well as projects which will change attitudes and behaviours in local communities.

The Safer Streets Fund builds on the Conservative Government’s existing measures to keep our streets safe. Including: almost 14,000 more police officers recruited across England and Wales, increasing police funding to almost £17 billion, and preventing 49,000 violent offences across England and Wales since 2019 through Violence Reduction Units - protecting the public and breaking the cycle of crime.

“No one should feel afraid while walking the streets of West Yorkshire, yet for so many people, particularly women and girls, feeling uncomfortable or even unsafe in public spaces has become an all-too-common occurrence.

“That is why I am delighted West Yorkshire has received £1.4 Million through our Safer Street Fund, which will deliver necessary measures such as extra CCTV and street lighting alongside engagement projects to change behaviours and prevent crimes being committed across West Yorkshire.

“Alongside our pledge to get more police on the streets, with almost 14,000 recruited in England and Wales – this investment will ensure people feel safe and secure in West Yorkshire as we Build Back Safer.”

“Our essential work with specialist groups is delivering practical support and change for women and girls across our communities and the Safer Streets Fund continues to make a difference to the safety of women and girls at a community level.”