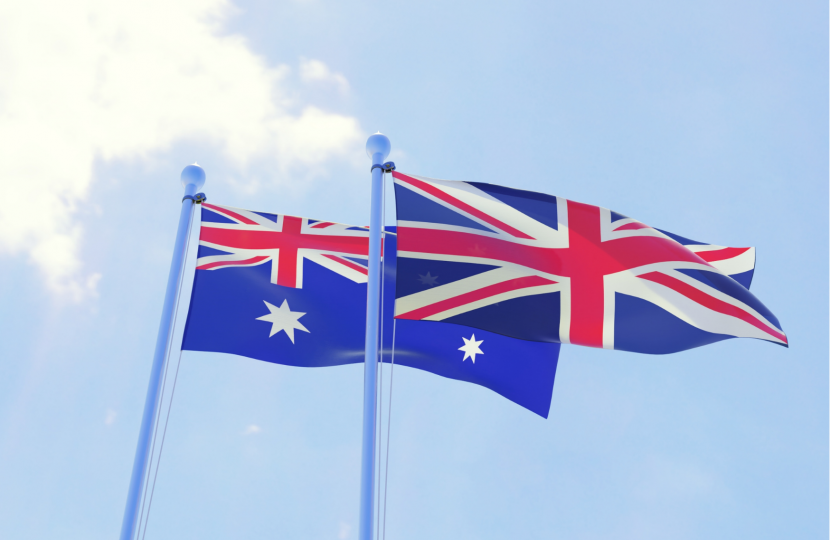 Yorkshire and Humber is set to benefit from an estimated £98 Million boost to its economy thanks to the historic Australia Trade Deal signed by the Conservative Government.

The UK has signed an historic trade agreement with Australia, our first ‘from scratch’ since leaving the EU, setting new global standards in digital and services and creating new work and travel opportunities for Brits and Aussies.

The deal will unlock £10.4 billion of additional trade, boosting our economy and increasing wages across the UK, while eliminating tariffs on 100 per cent of UK exports.

It is a deal tailored for the UK economy with cutting-edge agreements in areas where Britain is a world leader, including in digital and tech, along with increased access to Australia for the UK’s powerhouse service sectors.

Craig Whittaker MP has welcomed the news that the deal is set to bring an estimated £98 Million benefit to Yorkshire and Humber’s economy, boosting household wages and creating new opportunities for businesses, as well as brining greater opportunities for work and travel.

This agreement will help create new opportunities for businesses in both the UK and Australia:

The deal is also a gateway into the fast-growing Indo-Pacific region and will boost the Government’s bid to join CPTPP, one of the largest free trade areas in the world, covering £8.4 trillion of GDP and 11 Pacific nations from Australia to Mexico.

“Leaving the EU and becoming an independent sovereign trading nation gives us the opportunity to strike out into the world and build new relationships with our friends and allies.

“This deal is a prime example of us how we can take advantage of these new opportunities, and the benefits that are brought to every region of the UK outside of the EU. It is fantastic news that Yorkshire and Humber is predicted to get benefit by £98 Million – a welcome boost for businesses and household wages.

“This is the first of many new trade agreements we are now free to strike, bringing a boost to our economy and increases in wages, helping to level up every corner of the country.”

“Our UK-Australia trade deal is a landmark moment in the historic and vital relationship between our two commonwealth nations. This agreement is tailored to the UK’s strengths, and delivers for businesses, families, and consumers in every part of the UK – helping us to level up. We will continue to work together in addressing shared challenges in global trade, climate change and technological changes in the years ahead.

“Today we demonstrate what the UK can achieve as an agile, independent trading nation. This is just the start as we get on the front foot and seize the seismic opportunities that await us on the world stage.”