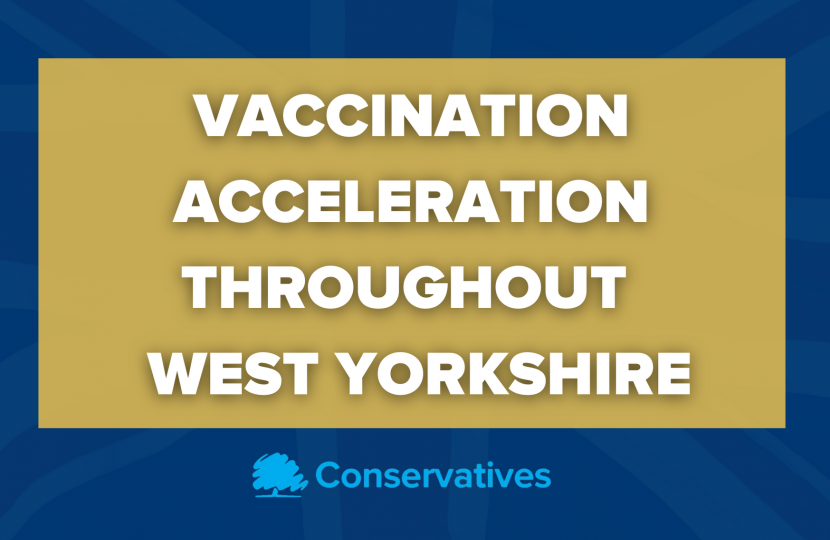 Through the Vaccines Delivery Plan, 242,840 doses have been administered in West Yorkshire and Harrogate (Health and Care Partnership)

Craig Whittaker MP has welcomed the Government’s Vaccines Delivery Plan – the biggest vaccination programme in British history – that sets ambitious targets as the government continues to ramp up its vaccine rollout.

Already in West Yorkshire and Harrogate (Health and Care Partnership) 242,840 vaccinations have been administered, as part of plans to vaccinate the top 4 priority groups by mid-February. In North East and Yorkshire, 942,876 have received a vaccine, with  1,014,383 doses administered in total across the area.

The latest figures show that, over the last seven days, the number of people who have been vaccinated has increased by 2.5 million – an increase of 50 per cent in a week. Over 13 per cent of the entire adult population has so far received a vaccine. In England, first doses have been delivered to over four-fifths of those over 80, over half of those aged 75-79 and three quarters of elderly care home residents.

“The NHS vaccination programme, the biggest in our country’s history, has got off to a fantastic start thanks to the hard work of all of those involved.

“It’s great to see that so many people in my area have received the vaccine as we lead the world in our fight back against coronavirus.

“I look forward to getting my vaccine over the coming months – and I urge everyone to do the same when they get the call up”.

“Vaccines are the way out of the pandemic and this historic rollout will cover every corner of the country.

“Through the UK Vaccine Delivery Plan, over seven million people have already received their jab. From hospitals to pharmacies, sports clubs to places of worship – we’re making sure the vaccine is as accessible as possible.

“In the meantime it is vital everyone continues to play their part in this national effort by staying at home to protect the NHS.”